I hate cutting up onions. The eye watering thing drives me nuts. It really is a miracle that I haven’t chopped off a finger from not being able to see clearly through the tears. But onions are in almost every dinner I cook, so I thought that it was just something I’d have to deal with.

Until one day a few years ago, I had a revelation. A dinner-making revelation. I could chop up all my onions at one time, toss them in a zipbag and put them in the freezer, and then just pull out whatever I needed while I was cooking.

So I did. I chopped up 3 large onions and put them in a gallon sized zipbag in the freezer. I just got the bag out when I was cooking sloppy joes or whatever and shake a bunch into the skillet. AND turns out that they cook faster after they’ve been frozen. Double win.

And then I thought, “Hey, if I can do this with onions, why not with bell peppers? And celery? And green onions?” Because frankly, who uses the whole package of green onions before they go bad? Unless you’re making enchiladas, followed by egg drop soup, and then a potato casserole bake, and then… I can’t think of anymore dishes that need green onions. But you get the picture.  Now I have a bag of them chopped up and ready to go when I need them (like once every 2 months…).

Same thing goes with celery. Who actually uses a whole bunch of celery before it starts to go limp? 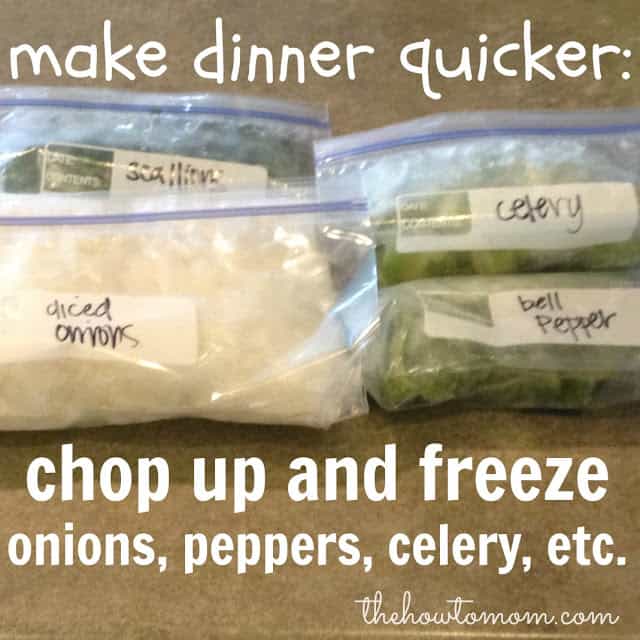 Dinner gets made faster, and you save money because veggies actually get used instead of rotting in your crisper drawer, and then having to re-buy them .

So I’ve had this tip on my “to blog about” list for awhile, and then last night, I went to Walmart and saw these in the frozen veggies section: 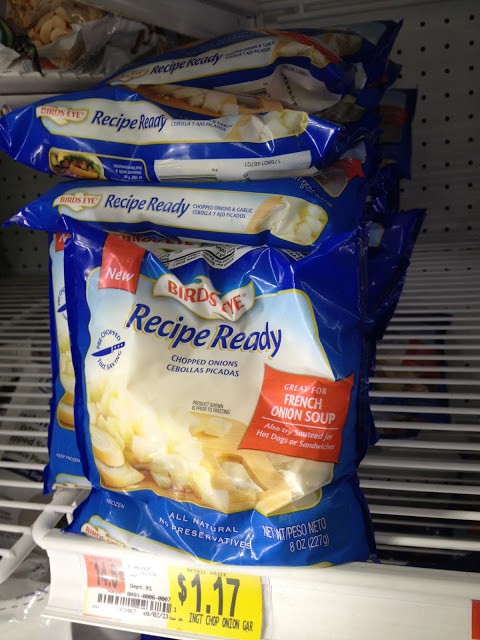 Imagine my satisfaction of knowing I thought of something BEFORE BirdsEye.  And I get the same convenience for cheaper. Ahh…

As a single person I found it easier to freeze a majority of my vegetables & meats so I can prepare meals quickly and still buy them in the larger (cheaper) quantities.

I've frozen sliced mushrooms, broccoli florets, shredded cheese, onions, sweet peppers, diced zucchini, diced tomatoes, carrots, never did celery before but will now. I used them in casseroles, pasta dishes, egg dishes like omelets or quiche. I put them on pizzas too - I froze pepperoni slices from the deli so they would last basically forever. I buy a ham and cut three big slices for ham steaks and dice the rest and freeze it. I buy large quantities of hamburger at Costco and precook several pounds and freeze it. I've even frozen cooked mashed potatoes. As long as you plan to cook the frozen items, they work.

The key to freezing anything is to lay it flay to freeze it, then break it apart BEFORE putting it in the ziploc container for long term storage. That way doesn't stick together. (I tried once to pre-cook the zucchini before freezing and found they just stuck together. Don't waste your time. You still have to cook them after freezing so why do it twice?)

Next try will be winter squash. Should I cube it and freeze it for cooking later? or cook it first then freeze it in individual portions I can reheat quickly? I welcome any opinions.

Yes, freezing veggies is the way to go, and it sounds like you're a pro at it! I think I'd try cutting the winter squash into cubes and then freeze it. Seems like freezing cuts down the cooking time of veggies, so I bet it will reheat quickly anyway.

I freeze cooked rice too. Cook a big batch of rice, rinse well in a strainer under cold water. Put around 1 to 1 1/2 cups of rice in a ziploc bag. Seal the bag and spread the rice around the bag to make it flat for freezing. To reheat, break apart the rice to get it out of the bag and microwave to reheat. Do not add water unless you didn't cook the rice completely the first time. Otherwise they get mushy.

Great tip! I've always wondered if I could freeze rice. Its nice to have on hand for a quick friend rice. I can't wait to try it. Thanks!

Genius! I freeze my green onions that I get from my mom's garden but never thought of freezing the others. I'll need to start. Thanks for the tip!

I also started cutting & freezing my onions & peppers a while back, but did not know that celery would freeze well! :) I freeze my green onions in an empty-clean water bottle & that makes it sooo easy just to shake out what i need! :)

If you rub a stainless steel spoon between your hands under warm running water, it will remove the garlic and onion smell. I actually run my hands along the blunt edge of my knife while rinsing it off. Try it, you'll be amazed how it totally removes the garlic smell!

Oh I'll have to try that! Thanks!